Alliance for Justice is a national association of over 120 organizations, representing a broad array of groups committed to progressive values and the creation of an equitable, just, and free society. Since 1979, AFJ has been the leader in advocating for a fair and independent justice system, preserving access to the courts, and empowering others to stand up and fight for their causes.

AFJ envisions a vibrant democracy that values and protects a just and equitable society.

To champion and secure a government where all voices, regardless of wealth, power, or privilege, are heard and valued.

Alliance for Justice was founded by attorney and activist Nan Aron in 1979, in response to a growing threat from the far right to decades of progressive advances in the United States. In the 40 years since, AFJ has fought for a fair justice system and a vibrant advocacy community that work to uphold and advance the rights of all.

The impetus for AFJ’s creation came in 1971, when the famous “Powell Memo” argued that the “American economic system [was] under broad attack” and urged the business community to weaponize the courts to serve business interests.

In a few short years, AFJ realized that the times called for a program focused on judicial selection. AFJ launched its Judicial Selection Project in the mid-1980s with an Advisory Committee drawn from 20 like-minded progressive nonprofits. In the years that followed, AFJ’s research and advocacy around federal judicial nominations would become a beacon for the progressive community — leading opposition movements against high-profile nominees such as Robert Bork, Clarence Thomas, and Brett Kavanaugh. During the Clinton and Obama presidencies, AFJ helped hundreds of highly qualified people ascend to the federal bench. 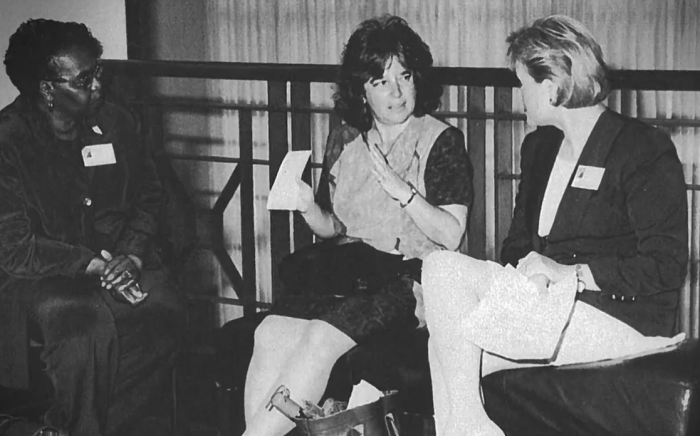 The launch of AFJ’s Bolder Advocacy program in the mid-1990s served as an invaluable resource for advocates for justice and the rights of all. Bolder Advocacy originated from a political climate in which a growing number of conservative federal judges were ruling against consumers’ rights, workers’ rights, civil rights, and the environment. Organizations advocating for these rights then turned to state legislatures to advance their missions. Bolder Advocacy was created to help these nonprofit groups and the foundations that fund them fully understand and exercise their rights to advocate for their causes, while staying within the laws governing their nonprofit status. Bolder Advocacy continues this important mission today. Given the political climate, this work has never been more important.

AFJ is proud of our many years of contributions to the cause of democracy.

We hope you will join us.

Iconic leader, Founder, and President of AFJ, Nan Aron stepped down in 2021, after 42 years of unparalleled determination and visionary leadership.

Nan was at the forefront of securing a judiciary that protects the constitutional rights of all individuals. During her tenure, she, along with our extraordinary staff, built the nation’s premier organization focused on social justice and the courts. Under Nan’s stewardship, AFJ led — and continues to lead — the charge against ultraconservative judicial nominees and has paved the way for hundreds of confirmations of well-qualified, fair-minded judges to take seats on the federal bench.