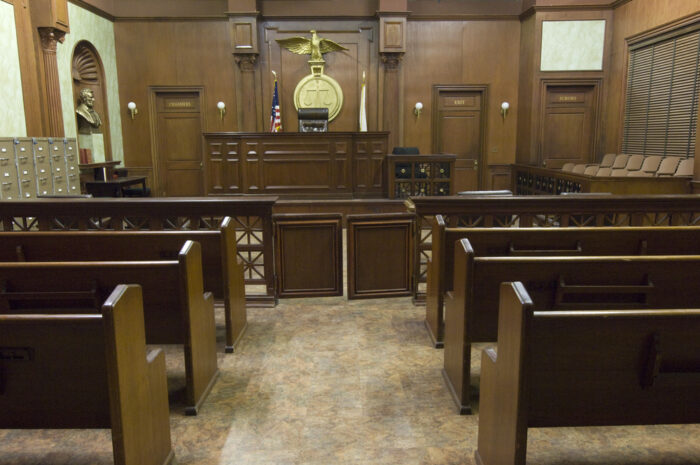 In many courtrooms, the judge’s seat would literally be inaccessible to some people with physical disabilities. PHOTO CREDIT: Shutterstock/sirtravelalot

Persons with disabilities deserve the opportunity to participate fully in society — accessing the same public spaces, housing opportunities, education, health care, and work as anyone else. Like other groups that experience discrimination, members of the disability community are often marginalized and underrepresented in positions of power, including in the federal judiciary.

The Centers for Disease Control and Prevention (CDC) estimates that one in four adults in the United States — 61 million people — has a disability. Millions more could soon join their ranks, as studies estimate that between 10% and 30% of people who contract COVID-19 experience lingering symptoms, or what has become known as “long-haul COVID.” Additionally, in 2019, 4.3% of children and 14% of public school students in the United States had a disability.

Despite the prevalence of disabilities throughout American society, only a handful of judges currently sitting on the federal bench identify as persons with disabilities. It is unacceptable that such a large section of the population, whose rights and legal protections are often at stake in federal courts, is so underrepresented on the federal bench.

The absence of the perspectives of persons with disabilities on the bench has real consequences. Federal judges play a critical role in interpreting the Americans with Disabilities Act (ADA) and other critical federal statutes, like the Rehabilitation Act of 1973 and the Individuals with Disabilities Education Act of 1990 (IDEA). And, in 1999, the Supreme Court’s ruling in Olmstead v. L.C. found that people with disabilities should have access to treatment and services within the community, not only in institutional settings. These laws and court decisions impact the health, well-being, and access of all aspects of society for millions of people with disabilities across the country.

This month, for example, the Supreme Court intended to hear oral argument in CVS Pharmacy Inc. v. Doe. This one case alone could have devastated two major disability rights statutes, the Affordable Care Act and the Rehabilitation Act, by allowing health insurance plans to deny persons with disabilities meaningful access to federally funded programs and benefits. Thankfully, CVS withdrew its petition in the Supreme Court, announcing instead that it would partner with the disability community “to seek policy solutions to protect equitable access to health care for all Americans and continue to protect the fundamental rights of people with disabilities.” Even though the CVS case is no longer being heard, it is a reminder of how much the courts can impact the fate of persons with disabilities.

Several recent cases similarly illustrate the difference federal judges can make when it comes to protecting disability rights. In November 2021, U.S. District Court Judge Lee Yeakel ruled that Texas Governor Greg Abbott’s ban on mask mandates in Texas schools violated a federal law protecting access to public education for students with disabilities. In March 2020, U.S. District Court Judge Stephanie Rose found Iowa violated the constitutional rights of children with disabilities due to its inadequate mental health care, misuse of solitary confinement, and use of physical restraints. Decisions like these give proper effect to some of our nation’s most important laws and uphold the rights and protections of persons with disabilities.

The need for increased disability representation on our federal courts is perhaps more urgent than ever before given the current makeup of the Supreme Court. The three Trump-appointed justices have repeatedly fought against the rights and protections of persons with disabilities. As a judge on the Tenth Circuit, Neil Gorsuch ruled to restrict disability rights, including reading IDEA extremely narrowly. In Thompson R2-J School District v. Luke P, Judge Gorsuch denied an autistic child a quality education, despite a determination by an impartial hearing officer, an administrative law judge, and a federal district court judge that the young boy needed placement in a residential school program. In a case raising the same issue, Endrew v. Douglas County School District, the Supreme Court unanimously rejected the egregiously low standard Gorsuch created. In Hwang v. Kansas State University, Judge Gorsuch ignored established law and allowed an employer to deny a professor recovering from cancer an accommodation to work remotely, even though her doctor told her if she returned to work during a flu epidemic she could die.

Likewise, as a judge on the D.C. Circuit, Brett Kavanaugh demonstrated a disturbing lack of regard for persons with disabilities. In Doe ex rel. Tarlow v. District of Columbia Judge Kavanaugh dismissed the claims of individuals with intellectual disabilities who argued their rights had been violated after they were subjected to elective surgeries — even abortion — without their consent.

As these cases and many others demonstrate, who sits as a judge matters. And it is critical that we have judges who are committed to ensuring equal justice for all Americans, including persons with disabilities.

President Biden and Senate Democrats should be commended for their efforts thus far to diversify the federal bench, but more work is still needed. On December 3, 2021, the Consortium for Citizens with Disabilities (CCD) Rights Task Force sent a letter highlighting the absence of persons with disabilities among the Biden administration’s judicial nominees. Given President Biden and Senate Democrats’ historic commitment to disability rights, we are confident the administration will address this underrepresentation by nominating qualified persons with disabilities, as well as lawyers who have been in the trenches fighting for disability rights, to our federal courts. This will transform the judiciary into one that better reflects the viewpoints and experiences of the entire population it serves.