Congress Can — And Should — Overcome The Supreme Court’s Harmful Decisions 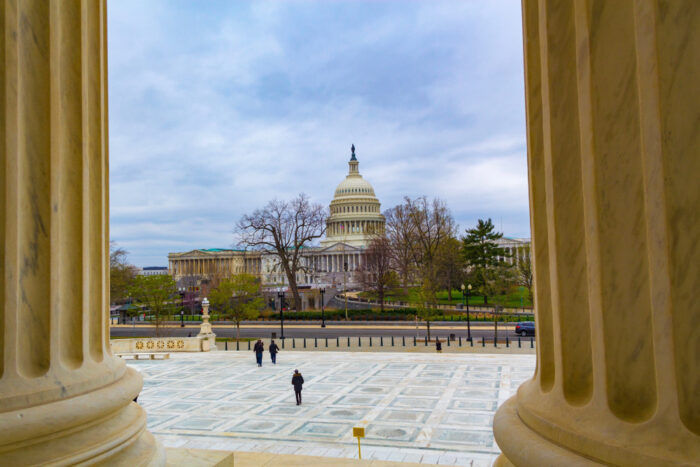 Twenty-five years ago, The Onion prophetically noted: “Supreme Court Rules Supreme Court Rules.” The satire’s premise was that the Supreme Court could, unchecked, claim any power it wants for itself. And now, nearly every day, the six Republican-appointed justices are doing just that as they impose their dangerous agenda on the country. We’ve seen recent decisions condoning abortion bans, handcuffing our ability to respond to the pandemic, and allowing racial gerrymandering, to name but a few. But last week Congress passed legislation that explicitly confronted egregious Court decisions, reminding us that, in fact, six Republican-appointed justices do not always have the final say on our rights and freedoms.

Earlier this month, Congress passed the Ending Forced Arbitration of Sexual Assault and Sexual Harassment Act of 2021. The bill’s direct effect is significant. For too long, unscrupulous companies have forced survivors of sexual harassment and sexual assault into secret, company-controlled, rigged private arbitration systems as an alternative to fair court proceedings. Because of Congress’s action, survivors will now be able to have their day in court and hold their employers accountable.

The bill is noteworthy for another reason. It is a reminder that in many areas of law, the Supreme Court does not indeed “rule.” For decades, conservatives on the Supreme Court have handed victories to companies that have used forced arbitration to prevent workers and consumers from holding corporations accountable. However, with the passage of the new law Congress said, this unfairness is no more — at least for sexual assault survivors.

As the bill’s passage demonstrates, it is possible for the American people, through their elected officials, to rein in what too often feels like unchecked power by the Republican-appointed justices to impose their harmful vision on the country. And it is by no means the first time it has done so. The Civil Rights Act of 1991 repudiated Court decisions that had undermined critical civil rights laws. The ADA Amendments Act of 2008 reversed Court decisions that had narrowed the Americans with Disabilities Act to leave millions of persons with disabilities without the equal opportunities Congress intended when it first enacted the law. The Lilly Ledbetter Fair Pay Act reversed a Court decision that denied women equal pay for equal work.

There are other bipartisan bills that Congress should also pass to correct flawed Court decisions. For example, Bob Casey and Chuck Grassley have bipartisan legislation that would reverse a Court decision that gutted protections for older workers and other civil rights plaintiffs.

That’s not to say it’s easy or even currently viable in most circumstances. Legislating even under the best of circumstances is hard; a bill needs approval of a majority in both houses and the president’s signature. And now, unlike for most of our republic’s history, we also face the unprecedented use of the anti-democratic filibuster, which provides Senate Republicans a veto over any effort to correct for decisions written by the very Supreme Court justices they confirmed to carry out their agenda.

So while the Republican-appointed justices are laser-focused on eroding our democracy, rights, and legal protections, the American people and Democrats in Congress are going to need to be more forceful in reasserting the American people’s authority under the Constitution. This will ensure the law protects the rights of all people, not just the wealthy and the powerful.

As the Court guts Roe v. Wade, Majority Leader Chuck Schumer is again calling on his colleagues to respond directly by passing the Women’s Health Protection Act, federal legislation that has already passed the House that would protect equal access to abortion. Congress needs to also ban forced arbitration in all contexts, not just those involving survivors of sexual assault and harassment. There is important legislation that would strengthen our democracy to respond to the Court’s horrific voting rights decision in Shelby County and other bad cases. Last year, the House passed an important labor reform bill, the Protecting the Right to Organize Act, which would overturn a number of anti-worker Supreme Court decisions. The list goes on and on.

Some members of Congress are clearly willing to take the necessary action to reclaim our rights and freedoms. Now they need to overcome anti-democratic obstacles like the filibuster to ensure they can follow through. The stakes are too high given this Court’s willingness to impose its narrow vision of the law. As Justice Ginsburg wrote in Ledbetter v. Goodyear Tire & Rubber Co., urging Congress to amend the law to fix the Court’s “parsimonious reading,” “[t]he ball is in Congress’s Court.” Congress rectified the Court’s flawed ruling last week to protect sexual assault survivors, and it can and should do more.

Daniel Goldberg is the Legal Director for Alliance for Justice.