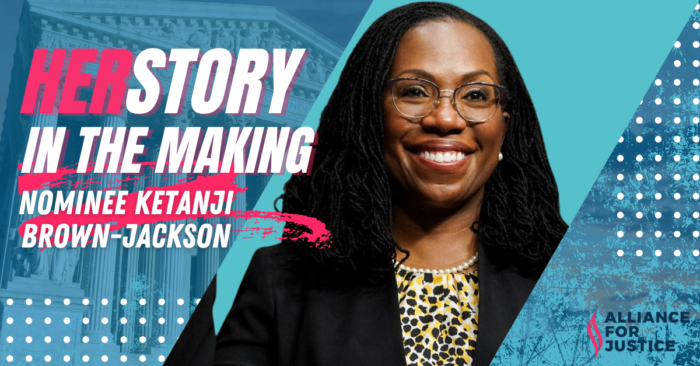 Judge Ketanji Brown Jackson’s impeccable credentials make her eminently qualified to serve on the Supreme Court. She brings broad experience across the legal profession, including as a federal appellate judge, a federal district judge, a member of the bipartisan U.S. Sentencing Commission, an attorney in private practice, and as a federal public defender.  Judge Jackson’s nearly nine years of experience on the bench is more judicial experience than current Justices Barrett, Kagan, Roberts, and Thomas had combined at the time of their confirmations.

Her judicial record includes nearly 600 written opinions that demonstrate a fair, evenhanded approach to the law and a commitment to protecting the constitutional values of liberty, equality, and justice for all. In addition to the rulings in the headlines protecting our democracy and the rule of law, these important decisions are representative of the courts’ impact on the everyday lives of Americans. Judge Jackson has a proven commitment to protecting the constitutional rights of all Americans, not just the wealthy and powerful.

Here are a handful of examples where Judge Jackson has protected the fundamental rights of real people in her courtroom.

Robert Willis, a 51-year-old Black biology and math teacher, had served in the District of Columbia Public School system for two decades. Yet, one month after the school district hired 900 new teachers, many of whom were young and new to teaching, he was fired as part of a district-wide reduction in force. He sued the district, alleging he was fired based on his age and race and in violation of the Age Discrimination in Employment Act and Title VII of the Civil Rights Act. Although Judge Jackson held that Willis could not challenge the reduction policy itself, she allowed his age and race discrimination claims to go forward.

Howard Tyson, a United States Postal Service employee who self-identified as Christian, argued his employer discriminated against him after he was transferred to a new, less desirable location. Tyson’s supervisor confronted him on several occasions for playing gospel music, but took no issue with other employees who played “secular music.” Judge Jackson ensured Tyson, who was self-represented, had a fair opportunity to be heard by denying the Postal Service’s effort to throw out the case, explaining: “[I]t is this court’s long-held view that pre-discovery motions for summary judgment … before the plaintiff has had the chance to gather and submit evidence related to the challenged employment decision—are seldom appropriate.” Judge Jackson determined Tyson had a potential case under Title VII, which protects employees from religious discrimination in the workplace.

When an incarcerated deaf individual, William Pierce, was denied accommodations in prison, a violation of the Americans with Disabilities Act (ADA), Judge Jackson ruled in his favor. Prison officials knew Pierce was “profoundly deaf,” yet refused to provide accommodations after his repeated requests for an interpreter. Pierce, who communicated by American Sign Language, was forced to communicate only through lip-reading and written notes for 51 days. Prison officials even handcuffed him during one visit from his partner and mother, making it impossible for him to communicate with them. Judge Jackson said the prison officials “figuratively shrugged and effectively sat on their hands with respect to this plainly hearing-disabled person in their custody.” Her decision recognized that although “[i]ncarceration inherently involves the relinquishment of many privileges,” incarcerated individuals retain important rights, “including protections against disability discrimination.”

In another disability rights case, Judge Jackson allowed the Equal Rights Center to move forward with its lawsuit concerning the inadequacy of Uber’s wheelchair accessible services that were less reliable, more costly, and took longer to arrive than standard vehicles, in violation of the ADA. At the start of the lawsuit, Uber had no wheelchair accessible vehicles in its 30,000-vehicle fleet in Washington, D.C., and tried to evade liability, claiming to be merely a “technology company” that was not primarily engaged in the business of transporting people. Judge Jackson firmly rejected this, ruling that Uber was obligated to provide transportation services that can be fully and equally enjoyed by people who use wheelchairs.

In her first published opinion on the D.C. Circuit, Judge Jackson authored a unanimous decision safeguarding the bargaining rights of public sector labor unions. For 35 years, the Federal Labor Relations Authority (FLRA) had required collective bargaining for any workplace changes that had more than a minimal impact on workplace conditions. In September 2020, however, the agency adopted a heightened standard requiring bargaining only in situations that have a “substantial impact on a condition of employment,” which made it harder for workers to exercise their sacred right to collective bargaining. After a detailed review, Judge Jackson ruled that the FLRA’s new policy, without seeking public comment, violated the Administrative Procedure Act.

In this case, an Occupy D.C. activist attending a protest in a public park was arrested and charged with disorderly conduct after cursing near police officers. Patterson, the protester, later sued the police for wrongful arrest. Judge Jackson denied police officers’ claims of qualified immunity, which protects government officials from civil suits. She found that the officers lacked probable cause to arrest Patterson and that an arrest based solely on the content of the plaintiff’s speech “unquestionably” violated the First Amendment. She explained, “no reasonable officer could conclude that Patterson’s conduct was likely to produce violence or otherwise cause a breach of the peace, as required to justify either punishing his speech under the First Amendment or arresting him for disorderly conduct” under D.C. law. This decision vindicated Patterson’s free-speech rights, while also recognizing the important government interests at stake.

Judge Jackson allowed the U.S. territory of Guam to move forward with a $160 million lawsuit against the U.S. Navy, which had created a polluting landfill on the island and was refusing to pay cleanup costs. As Judge Jackson explained, by the time the U.S. government handed over control to civilian authorities, the landfill already contained “significant quantities of trash and hazardous waste that posed a serious risk to the surrounding environment.” The D.C. Circuit Court reversed her decision, but the U.S. Supreme Court ultimately agreed with Judge Jackson, allowing Guam to proceed with its lawsuit. As exemplified by this decision, Judge Jackson understands the government’s duty and authority to protect the public and hold powerful interests accountable, including when it comes to protecting our natural environment.

After the Department of Health and Human Services (HHS) cut grant funding under Congress’ Teen Pregnancy Prevention Program (TPPP) without explanation, Judge Jackson determined the agency had acted contrary to law. The agency had arbitrarily decided to end more than $200 million in funding to programs that had been found effective at reducing teen pregnancy across the country. HHS argued that “withholding” funding that had already been awarded was fully within its discretion and unreviewable. Judge Jackson rejected this argument, finding that the decision to cut the grants short with “no explanation whatsoever” — and when the organizations were fully complying with the award’s terms — violated the Administrative Procedure Act. Judge Jackson recognized the judiciary’s role in restraining administrative discretion when an agency action is clearly unreasonable and has massive consequences for the public.