Our statement on the NYT report
Member Spotlight 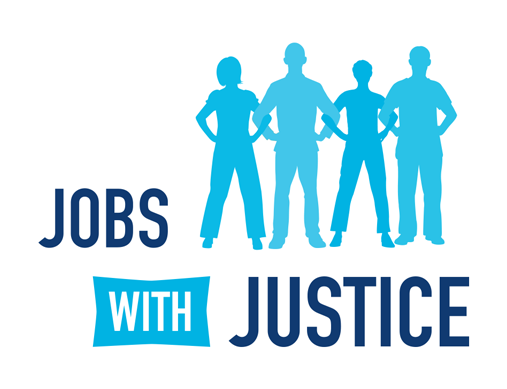 What is Jobs with Justice’s issue focus?

Jobs With Justice is a national network of 36 fully autonomous local coalitions working to build power for working people through innovative corporate campaigns, structural/legislative change, and by building new avenues for sustained worker and community voice.

What is something Jobs with Justice is currently prioritizing? Can you tell our readers a little about the goals of the campaign/project?

JWJ is not traditionally a housing rights organization, we are a worker rights organization.  We’re used to fighting for bargaining rights, wages, and working conditions.  In this moment of global economic turmoil, we were ready to fight for workers but were surprised by the emerging battlefield. Workers were clear—they needed housing stability.  Surprised and excited, we quickly pivoted to the needs of workers in our base, and on April 15th, we demanded immediate rent cancellation for the duration of the pandemic through a nationwide housing strike.  We wrote letters demanding rent cancellation to over 40 different corporate landlords who control millions of units of housing across the country and are operated by some of the most powerful billionaires in the world.  American Campus Communities’ response to us included their commitment to cancel  $17 million of rent for its tenants.

Tips and lessons: Do you have an “Advocacy Tip” to share or “Lesson Learned” while organizing this or other campaigns?

As federal eviction moratoria were set to expire at the end of July, we geared up for another set of actions.  After George Floyd’s murder and the national uprising for Black Lives, JWJ sent another letter on July 1st to the same set of corporate landlords.  This time, we demanded rent cancellation and eviction moratoria—with the explicit understanding that evicting people is another use of state force against Black and brown communities. And working people got that connection right away and joined us by the thousands. Armed with 9,000 petition signatures, we delivered that message to Greystar, Equity Residential, and Cerberus Capital with in-person delegations on July 31st.  Increasing pressure on corporate landlords is one of many ways to win immediate relief for workers. JWJ will continue to fight for rent cancellation until corporate landlords stop forcing working people to choose between groceries and rent.

Many of our member organizations work with both our Bolder Advocacy initiative on c3/c4 advocacy rules and guidance and our Justice programs on the importance of the courts and judicial nominations. How has either or both most helped you? How have you worked with either or both?

We have long recognized the importance of the courts to working people’s lives. Billionaire CEOs exploit divisions among working people on issues such as abortion and civil rights to install judges who weaken protections for working people including our rights to join unions, to democratic control over our lives, and to breathable air and drinkable water. As cases such as Janus v. AFSCME and Citizens United make clear, the fight for a fair judiciary is fundamental to securing working people’s rights and dignity. We have called for the winner of the 2020 election to appoint judges with a demonstrated commitment to both civil rights and the rights of working people.

Layshia Clarendon, Women’s National Basketball  Association  All-Star,  inspires us. When it comes to organizing working people to defend economic democracy, we often use the sports metaphor that it’s not just ok for us to run the ball, we need to be calling plays.  American sports leagues are all too often divided between white ownership and Black athletes — with Black athletes expected to sacrifice their bodies for the sake of owner profits and to stay silent and happy while doing so. And when Black athletes don’t stay silent, as we’ve seen with Colin Kaepernick, they risk losing their careers. But each time a Black athlete takes Kapernick’s lead, and bravely speaks out, we get closer to closing the racial gaps in our sports leagues and our communities.

As a Black, gay, female, non-cisgender athlete,  Layshia had firsthand experience in overcoming injustice in her athletic career. She used this experience to speak out for herself and for her fellow marginalized athletes, fighting hard against ownership to build a more inclusive and progressive WNBA. Her strong support for her fellow athletes is why Layshia’s peers elected her as First Vice President of the Women’s National Basketball Players Association, where she helped negotiate a historic Collective Bargaining Agreement for WNBA players — one that can be used as a model, not just for future WNBA contracts, but for all women’s sports leagues. We recognize and are grateful for all the work that Layshia and the WNBPA have done to close the racial and gender gaps in sports.

Learn more about Jobs with Justice.