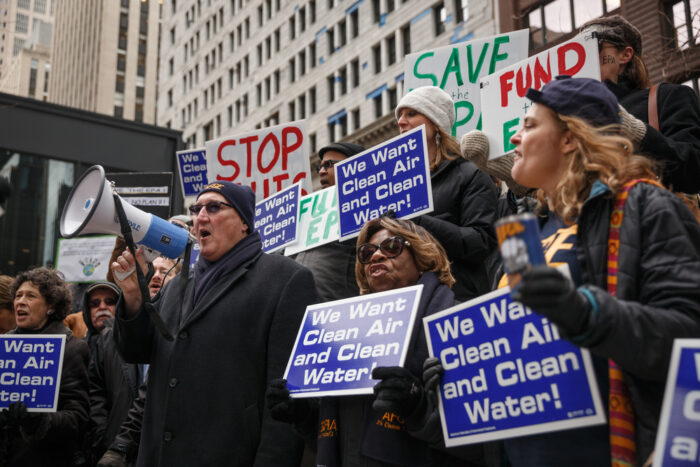 On Monday, February 28, 2022, the Supreme Court heard oral arguments in West Virginia v. Environmental Protection Agency, the most significant climate case in decades. Coal companies and Republican politicians are asking the Court to block the Environmental Protection Agency’s (EPA) ability to stop or slow down climate change. The Court’s decision could have catastrophic consequences — not only for the federal government’s ability to address climate change through environmental safeguards, but for its ability to protect Americans’ health and safety in other areas.

The coal companies and Republican politicians calling on the Court to block these climate regulations lost at the D.C. Circuit and are making a last-minute power grab. These petitioners argue that, contrary to decades of precedent, the Clean Air Act does not actually give the EPA the authority to adopt safeguards to fight climate change. Both petitioners and those who have called on the Court to side with them, like Exxon and groups backed by the Koch brothers, unsurprisingly have financial interests in the coal, oil, and gas industries.

The EPA, supported by a broad coalition of environmental and public health groups, businesses, scientists, and elected officials, is defending its ability to create regulations — and both the Clean Air Act itself and Supreme Court precedent are on its side.

It’s clear from decades of settled law and interpretation that the Clean Air Act authorizes the EPA to curb dangerous air pollutants that cause climate change and that put the lives of Americans at risk. The Clean Air Act, passed in 1970 with strong bipartisan support, gave the federal government authority to address pollution and ensure Americans had safe and clean air. The Supreme Court has ruled on three separate occasions that through this law, the EPA indeed has the power to address greenhouse gas pollution — in Massachusetts v. EPA, Utility Air Regulatory Group v. EPA, and American Electric Power v. Connecticut.

A ruling against the EPA would have severe consequences at a time when climate change is already threatening millions of lives. More than 40 percent of Americans live in communities hit by climate disasters in 2021. These events, like the Colorado wildfires, Hurricane Ida in Louisiana, or Winter Storm Uri in Texas, are only a sign of what’s to come as climate change continues. Cities like Annapolis, Miami, and New Orleans are at risk of disappearing under rising oceans. Last June was the hottest month on record and its scalding temperatures created a surge of emergency room patients struggling with heat-related illness. Low-income communities and communities of color are disproportionately burdened by these changes because they are more likely to be exposed to air and water pollution and less likely to have access to health care. As the consequences of climate change grow more harmful, we need the EPA to have more authority to protect the nation — not less.

While the case is specifically about the EPA, a ruling for petitioners could also hamper the ability of other government agencies to address urgent health and safety issues beyond climate change. Conservative justices have recently trumpeted the “major questions doctrine,” a legal theory invented by the Court, including at oral arguments in this case. It argues that it’s actually the Court’s job to interpret laws in matters of major significance, so the doctrine would strip power from all federal agencies if imposed. Agencies like the Department of Health and Human Services, Department of Labor, or the Consumer Product Safety Commission could all be impacted. These agencies, which ensure the safety of the food we eat, regulate life-saving medications, protect workers’ rights, and ensure financial stability are essential to the lives of everyday Americans.

Wealthy and powerful conservative interests stand to benefit from a ruling against the EPA. Regulations like worker safety standards, prescription drug guidelines, and limits on power plant emissions restrict corporations from doing whatever they want to maximize profits. For example, in 2000, the EPA fined Koch Industries $30 million for its role in 300 oil spills that resulted in crude oil leaking into ponds, lakes, streams, and coastal waters. Koch Industries, and other corporations, have had profits compromised by the EPA and other agencies before, and they don’t want to be held accountable again.

With the consequences of climate change escalating each day, the EPA is crucial to protecting our families and communities. Decades of precedent and basic common sense for protecting the American people require supporting the EPA’s stance. Rather than siding with big-money interests, the Court should uphold the long-established authority of the EPA — and dozens of other agencies — to protect our ability to address the most urgent national issues.

Nora Howe is a Dorot Fellow at Alliance for Justice.