The Desperate Attempts To Distract You From Roe Being Overturned 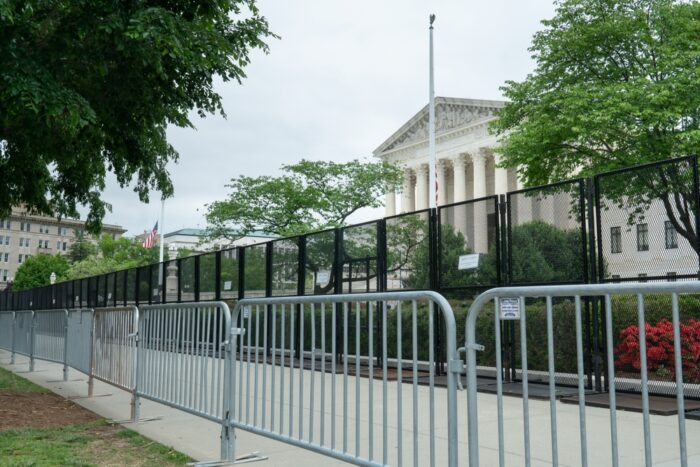 After the decision leaked, the Supreme Court put up security fencing to limit protesting outside the building. CREDIT: Shutterstock/010110010101101

It’s only been two weeks since Politico first published a leaked draft of Justice Alito’s opinion in Dobbs v. Jackson Women’s Health Organization that makes clear the Supreme Court will be overturning Roe v. Wade and Planned Parenthood v. Casey. In that time, Republican lawmakers and other opponents of abortion access have already cycled through multiple narratives attempting to distract from the significant impact of this impending decision. Friends in support of reproductive rights, please do not fall for these diversions.

Here’s a quick guide to identify — and reframe — these harmful narrative traps.

The very first talking point in the immediate wake of the leak was that this opinion was “just a draft” and thus should not be treated with very much significance.

It is, of course, true that the opinion has not yet been issued and that for now, Roe and Casey remain the law of the land. Anyone who was planning to get an abortion can and should keep their appointments to do so.

But the reality is that the Supreme Court justices vote on how an opinion will come down before any draft is written. That’s how we know that there are five votes to overturn Roe, and not one of those five justices is likely to flip on this issue. Subsequent reporting has indicated that Chief Justice Roberts apparently wanted to find a middle ground in the Dobbs ruling on Mississippi’s 15-week abortion ban and leave the Court’s precedents at least somewhat intact, but the other five conservatives did not support that less radical approach.

Moreover, follow-up reporting from Politico also revealed that there are currently no other drafts circulating with the justices. That’s in part because no dissent has been drafted yet, which would prompt opportunities for the justices to respond to each other.

There is no reason to doubt this is the opinion of the Court. Ignore anyone who says otherwise and be ready if they try to draw attention to any insignificant changes that might appear in subsequent leaked drafts or the final opinion. There are five votes to overturn Roe and we need to plan accordingly.

“The Leak Is The Story”

One of the narratives that quickly emerged after Politico’s story dropped has been an attempt to frame the leak itself as a bigger story than the substance of the draft ruling.

“This is an attack on the Court,” said Sen. Marsha Blackburn (R-TN), who also wants the Court to overturn Griswold v. Connecticut, which ensured married couples’ access to birth control.

“This lawless action should be investigated and punished to the fullest extent possible,” said Senate Minority Leader Mitch McConnell, who is already salivating over Congress passing a national ban on abortion after this ruling is issued.

Speculation about the source of the leak has been everywhere: Maybe it was one of the liberal justices’ clerks whistleblowing to warn everyone. Maybe it was one of the conservatives’ clerks trying to undermine Chief Justice Roberts. Conservative outlet Newsmax confirmed its racist bona fides by accusing newly-confirmed Justice Ketanji Brown Jackson of the leak, even though she hasn’t even been seated on the Court yet.

At the end of the day, it doesn’t matter much who leaked the opinion. That is why this is a distraction. If the leaker is uncovered, it will likely be a person unknown to the public, and if they face any consequences, it will change nothing about the Court or its ruling ending nationwide access to abortion.

We may not even hear much from any investigations. As Dahlia Lithwick and Mark Joseph Stern noted at Slate, the Supreme Court has invested nothing in improving its ability to monitor and report misconduct — to say nothing of there still being no code of ethics governing the justices in the first place. It’s likewise unlikely that the Department of Justice will get involved.

If anything, the leak could be a positive turning point for the Supreme Court. After all, it has embraced a debilitating lack of transparency and is now controlled by ultraconservative justices trying to decimate the laws and freedoms we hold dear. Daniel Ellsberg, who leaked the Pentagon Papers in 1971, applauded the Supreme Court leak, observing, “Unauthorized disclosures are the lifeline of a republic.” The politicization of the Court is self-evident, and transparency is vital for accountability.

Public trust in the Court has already plummeted, and it’s not because of the leak, but because of the actions the Court is taking. Don’t heed those who try to suggest that one person’s actions inside the Court matter more than the millions of people who will be harmed by the rulings in Dobbs or other cases. If there are any developments in the leak investigation, don’t be distracted by those who care more about exposing a leak rather than the undoing of our rights.

“Protests Outside Justices’ Homes Are Uncalled For”

Since the leak, protests have erupted across the country, including outside the homes of the conservative Supreme Court justices who signed onto the leaked opinion. A candlelight vigil protest held outside Justice Kavanaugh’s home, for example, was organized by one of his own neighbors. These peaceful protests have happened on public property, with no public threats to the justices or their families.

Republican officials are nevertheless capitalizing on the protests to frame the extreme justices as victims. Unsurprisingly, these narratives are falsely portraying the protests in a negative light, ignoring the significance of civil disobedience in civil rights struggles, and sidestepping significant hypocrisies of the court when it comes to who can protest where.

In the 1994 Supreme Court decision in Madsen v. Women’s Health Center, Inc. concerning protests at a Florida abortion clinic, the Court found that a 300-foot radius for a buffer zone around the homes of the clinic’s staff was too broad and interfered with the rights of protesters. In short, the Court made it clear that protesting outside people’s private homes was totally acceptable under the Constitution — at least for opponents of abortion.

Further, in 2014, the Supreme Court struck down a Massachusetts law that created 35-feet buffer zones around the entrances of abortion clinics, a response to the very real threats that clinics and their patients receive. “Petitioners are not protesters,” Chief Justice Roberts wrote of the individuals who stand outside clinics holding signs while shouting at and threatening those trying to obtain an abortion. Once again, there were no protest limits for opponents of abortion. Notably, that reasoning did not appear to apply in the week after the leak when the Supreme Court erected massive fences to limit protesting outside of the Court itself.

Cries from Republican lawmakers to protect the justices have also been mocked given their willingness to defend the individuals who violently stormed the Capitol trying to overturn the 2020 election. As Sen. Dick Durbin (D-IL) countered: “What did the Republican National Committee say in an official release about the January 6, 2021, insurrectionist mob who crashed through the Capitol here, desecrating it and endangering the lives of innocent people?  What did they say about it?  They called it ‘legitimate political discourse.’”

Not everyone has to agree to protest in the same way, but debating how to protest appropriately when the Supreme Court is stripping away life-saving protections is not productive. Short of any actual violence or threats against the justices or their families — of which there have been none that we know of — this is yet another distraction from the impact of the ruling.

Roe is going to be overturned in the coming months. It will be a cataclysmic setback for our democracy with massive repercussions for the health of the American people. That is the reality we need to respond to. Allowing ourselves to get caught in fake counter-narratives will only hamper our ability to ensure everyone seeking an abortion can access one.

Zack Ford is the press secretary at Alliance for Justice.