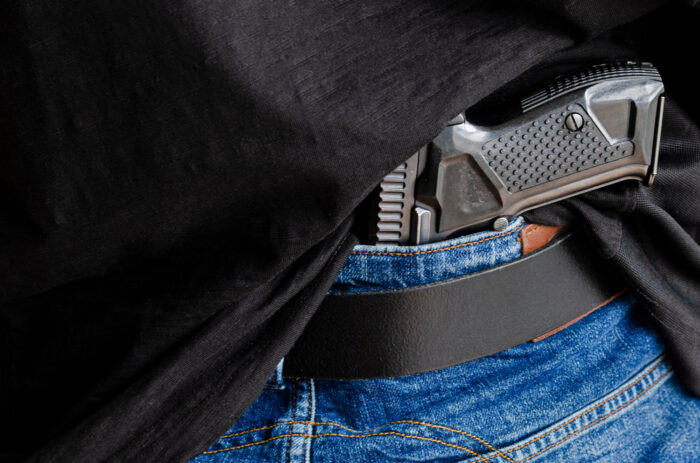 So you want to carry a pistol in your pocket?

If you live in New York, state law requires you obtain a special license before you’re allowed to carry a concealed handgun, and not everybody automatically qualifies. That law has required for over a century that New Yorkers must demonstrate “proper cause” to receive such a permit, and a vague claim of “self-defense” is not enough. But the Supreme Court might soon change that.

The Supreme Court will decide this term whether New York’s law prohibiting concealed carry without a license offends the Second Amendment. The case is New York State Rifle and Pistol Association Inc. v. Bruen. The petitioners challenging the law argue that they are entitled to carry concealed pistols because the Second Amendment has long protected the right to carry and prohibited state control of pistols carried for self-defense. The constitutional right to “keep and bear arms,” they claim, means that the ordinary citizen can carry a pistol on his person almost anywhere and everywhere. Petitioners assert that their interpretation of the right is compelled not only by the text and history of the Second Amendment but by the Court’s 2008 decision on its meaning in District of Columbia v. Heller.

The case arose when two individuals sought unrestricted licenses to carry concealed handguns outside of their homes for purposes of self-defense. They had requisite training in firearms safety and use. The state licensing officials denied both applications because they did not contain a specific description of the need for self-defense; however, the individuals did still receive concealed carry licenses for hunting and target shooting. Nevertheless, they joined up with a private group, New York State Rifle and Pistol Association, to sue for an injunction compelling the state to issue unrestricted licenses to the two individuals because they believe denial of the licenses offended the Second Amendment.

Bruen has been argued and is awaiting decision. The decision will have implications well beyond New York for every state that chooses to restrict or prohibit possession of handguns outside the home.

Indeed, the case is an effort by gun groups to expand Heller, a landmark decision that struck down the District of Columbia’s ban on possession of pistols in the home and greatly limited the ability of states to control private ownership of handguns. The majority, in a lengthy opinion by Justice Scalia, concluded that the language of the Second Amendment’s first clause (“A well regulated Militia, being necessary to the security of a free state…”) did not mean that the right “to keep and bear arms” applied only to governments or organized military groups. The 5–4 majority held that the Amendment protected the right of ordinary citizens to “keep” arms in their homes. The Court said, “The handgun ban amounts to a prohibition of an entire class of ‘arms’ that is overwhelmingly chosen by American society for that lawful purpose [self-defense]. The prohibition extends, moreover, to the home, where the need for defense of self, family, and property is most acute.”

Elsewhere in Heller, the majority recognized that gun violence was a national problem, but that “the enshrinement of constitutional rights necessarily takes certain policy choices off the table.“ In other words, as petitioners argue in their brief in Bruen, getting handguns off the streets to prevent more deaths is not a policy choice the Constitution permits. It unnecessarily burdens the ordinary citizen’s supposed enshrined constitutional right to carry a gun.

Indeed, it appears not to matter that laws like New York’s work to reduce gun violence. A 2017 study published in the American Journal of Public Health found that across all 50 states over a period of 25 years, states that made it easier to carry concealed weapons had 10.6% higher rates of handgun homicides. Research published the following year by the National Bureau of Economic Research found that ten years after states make it easier to carry a concealed firearm, their violent crime rates climb 13-15%.

New York and some of the amicus briefs likewise make powerful historical showings that the right of the state — before and after the creation of this country — to regulate carrying of firearms in public by ordinary citizens has never been seriously doubted. But whether the Court is impressed by the historical evidence or not, the questions in Bruen are different from and more far reaching than those in Heller.

In Heller, District of Columbia law totally banned handgun possession in the home and required all firearms in the home to be disassembled or bound by a trigger lock. By contrast, Bruen involves a statutory licensing scheme. People can apply for licenses to carry concealed handguns and can obtain them if they show “proper cause.” Licensing officials are given broad discretion in deciding whether an applicant has “proper cause,” which has been interpreted to mean a showing of particular danger, and almost no one gets a license. It is the policy of the state of New York to take the handgun, “the quintessential self-defense weapon,” out of the hands of private individuals. The goal is to limit mayhem caused by easy availability of those weapons on the streets, and the Second Circuit found that the law reasonably related to the important goal of public safety.

Petitioners argue that the need to carry weapons for self-defense is greater outside the home and that the right to carry and use a pistol cannot be restricted under a licensing scheme like that in New York. The state of New York counters that the law ought to be upheld because, as Heller explicitly declared and as history proves, the right to bear arms is not unlimited and the New York restrictions are consistent with the historical scope of the right.

The Court could read the private right to bear arms to be so enshrined that no state scheme that requires an applicant to show a special need is enforceable. If it did, any ordinary citizen would be able to carry a pistol in their pocket anywhere in the United States. While it’s not clear how many unrestricted licenses New York has declined, what Petitioners are asking the Court to hold is that “the Second Amendment plainly forecloses New York’s refusal to let petitioners carry handguns for self-defense just because the state is not convinced that they have demonstrated unusual need to exercise fundamental rights guaranteed to all.” This argument appears to capitalize on what the Court said in Heller when it observed that the “enshrinement of constitutional rights necessarily takes certain policy choices off the table.” If so, then they would be taking even more policy choices off the table that substantively reduce deaths in our country by handguns. That would be a big step for this or any other court to take.

It seems likely, however, that the same Court that held that the Second Amendment enshrines the right to “keep” arms, as it did with Heller’s question of handgun possession, will conclude that it does the same for “bearing” arms in this concealed carry case. That’s particularly true given how much more conservative the Court is compared to its makeup 14 years ago.

Requiring that an applicant demonstrate something more than good moral character in order to put a pistol in his pocket is not an extreme notion. The Court could side with Petitioners but permit limits on concealed carry which pass the same sort of scrutiny applied to restriction of other rights, such as those in the First Amendment. Most restrictions on First Amendment rights must pass a strict scrutiny test. If that is the test for restriction on Second Amendment rights, licensing schemes like New York’s that require showing a particular need for self-defense will not survive.

But drawing such a comparison would itself be a dangerous conceit for the Court to adopt, as provocative speech is not, in and of itself, a deadly weapon like a handgun.

It seems likely the Court took this case to produce a different outcome from the lower court’s decision to uphold the law. How they go about expanding access to handguns, and the deadly consequences for our nation that follow, remain to be seen.

William W. Taylor III is a founding partner of Zuckerman Spaeder LLP and one of the country’s foremost litigators.