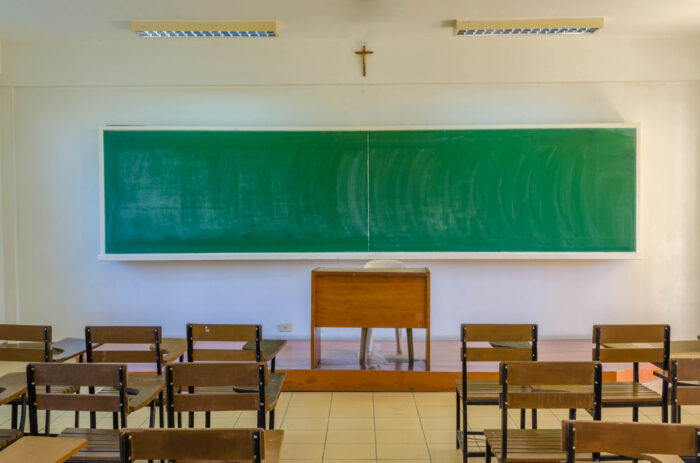 The Court’s decision in Carson v. Makin, set for oral argument on December 8th, could put the well-being of students in Maine, and around the country, in jeopardy. In the case, Maine parents sued the state, arguing that it should pay for their children’s private, religious education. The parents argue that a special Maine education program that pays for students in rural areas with no public schools to attend neighboring districts should pay for private religious schools too.

There are huge problems with this demand. This case is the latest in a series of efforts to privatize education through the courts, an end-run around unpopular legislative plans to implement vouchers or other programs that subsidize private education.

As it stands, any parent in Maine can pay to send their kids to a private religious school regardless of where they live. If the Supreme Court caters to the demand in this case, Maine would have to cover those costs for families who live in counties with no public schools. Public money should go to public schools, which are accountable to the state’s education standards and nondiscrimination protections and don’t force students to participate in sectarian religious practices and instruction.

Requiring Maine to foot the bill for these religious private schools will take desperately-needed money away from the public schools that welcome all students, including 94% of Maine’s students of color. Public schools are foundational to American education and designed to serve every child unlike the private, religious schools that often, either implicitly or explicitly, exclude many marginalized student groups. Maine has consistently fallen short of funding public schools — so much so that voters passed a referendum 17 years ago demanding that the state fund at least 55% of public education costs. With COVID-19 related funding, the state met that threshold for the first time just this year. As schools continue to battle the COVID-19 pandemic, students in public schools need more, not fewer, resources.

If the state must fund these religious schools, it would immediately raise the question of whether it must also exempt them from abiding by nondiscrimination protections. Discriminatory practices that target various protected groups plague many private religious schools. These schools can require girls to wear “modest” clothes, punish survivors of sexual assault for “sexual immorality,” and even expel pregnant students. Religious schools likewise often refuse to enroll openly LGBTQ+ students or the children of openly LGBTQ+ parents, creating toxic environments for students who come out as LGBTQ+ after they enroll. Religious private schools, which don’t have to comply with the Americans with Disabilities Act, also sometimes refuse to enroll students with disabilities. One Maine religious school stated that it does not accept “children with substantial learning disabilities, serious emotional or social problems, or severe physical disabilities.”

It’s important to remember that the fight to use public funds for private, discriminatory schools is not new. After centuries of prohibiting and grievously underfunding the education of Black children, the 1954 landmark decision Brown v. Board of Education held that racial segregation was unconstitutional and required the integration of schools. A huge backlash followed, with private school enrollment growing at unprecedented rates from 1950 to 1965. Most of the enrollment was made up of white students whose parents did not want them enrolled in integrated schools, instead placing them in private “segregation academies.”

State legislatures, most notably in the South, facilitated the growth of these schools by enacting laws that authorized public money for these private schools, sometimes in voucher form. These laws were ultimately struck down, but voucher policies came back in full force across the country since the late-90s. For example, North Carolina’s 2013 voucher law sends thousands of taxpayer dollars to schools like Bible Baptist Christian, which explicitly refuses to admit LGBTQ+ students. The school’s textbook says that it can refuse to enroll or expel a student for “living in, condoning, or supporting any form of sexual immorality; practicing or promoting a homosexual lifestyle or alternative gender identity;” Carson v. Makin is part of this legacy of privatization, discrimination, and segregation.

Public schools are the most important institution for maintaining our democracy. Our public schools unite communities and foster common understanding by bringing children with different backgrounds, opinions, and beliefs together. Our schools prepare students for civic and community engagement in a multi-racial democracy where enacting change means working with people even if they look or think differently than you do.

We need to move our public education system forward by shoring up protections for students of color, LGBTQ+ students, and students with disabilities. If the Supreme Court’s conservatives side with the private schools in this case, it would pillage the already limited resources available to our public schools and make them even more inaccessible for the students most dependent on them for their education.