Our statement on the NYT report
Report

A Fairer Court: How President Biden and Congress Raised the Bar in 2021 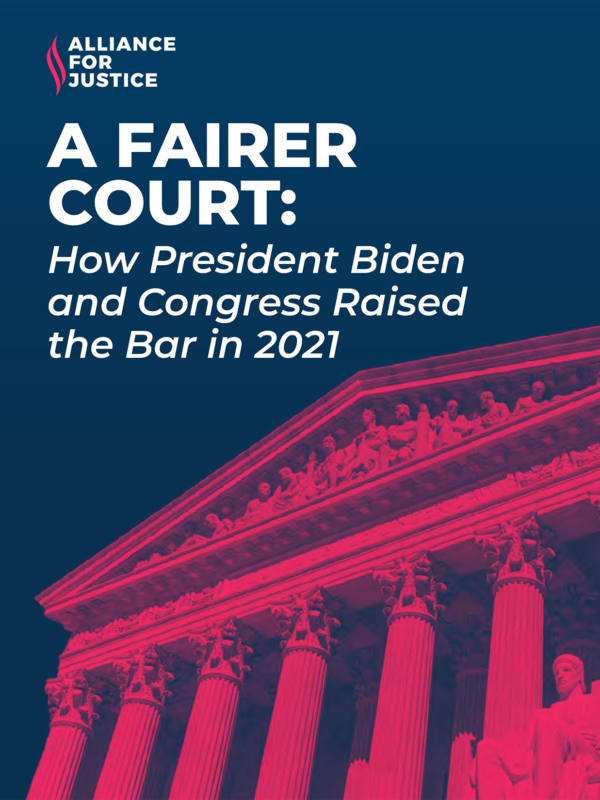 Alliance for Justice is proud to announce the publication of its latest report A Fairer Court: How President Biden and Congress Raised the Bar in 2021. The report covers what has been a critically important year for the nomination and confirmation of judges to the federal judiciary, which has become a cornerstone of President Biden’s historic legacy.

As the Supreme Court turns back the clock on so many of our rights and legal protections – from undermining the Voting Rights Act to gutting the right to have an abortion – Alliance for Justice continues to fight to repair the immense damage done to our Constitution and civil and human rights.

After the 2020 election, AFJ led over 70 groups in demanding that the Biden administration prioritize the courts on day one, and the Biden administration has made judicial nominations a priority. In December 2020, incoming White House Counsel Dana Remus sent a letter to Democratic senators signaling the administration’s strong commitment to ensuring demographic and experiential diversity on the federal judiciary and informed senators that the White House was “focused on nominating individuals whose legal experiences have been historically underrepresented on the federal bench.”

As of December 2021, the Biden administration and Senate Democrats have delivered on this promise.

AFJ’s timely report, issued at the end of the first session of the 117th Congress, offers a summary of President Biden and Senate Democrat’s success in nominating and confirming remarkable lawyers to the federal bench.

Numbers alone tell a success story. President Biden has the most lower court judges confirmed (40) of any first-year presidential administration since Ronald Reagan (40). His judges, moreover, reflect a historic level of demographic diversity.

Unlike President Trump’s judges, who were selected for their records of demonstrated hostility towards critical constitutional rights and legal protections, Biden’s judges have a demonstrated commitment to equal justice under the law. As discussed in this report, President Biden has made a remarkable commitment to selecting high quality jurists with impeccable records of public service. He has nominated public defenders, civil rights lawyers, economic justice attorneys, and “those who represent Americans in every walk of life” as historically underrepresented groups on the federal bench.

This report celebrates the 40 Article III judges already nominated and confirmed by President Biden and Senate Democrats. We are confident they will have a positive impact on the rights and lives of the American people for decades; and we are confident that the many judges confirmed in the future will further cement champions of justice on bench.