Economic Justice, Judges, and the Law 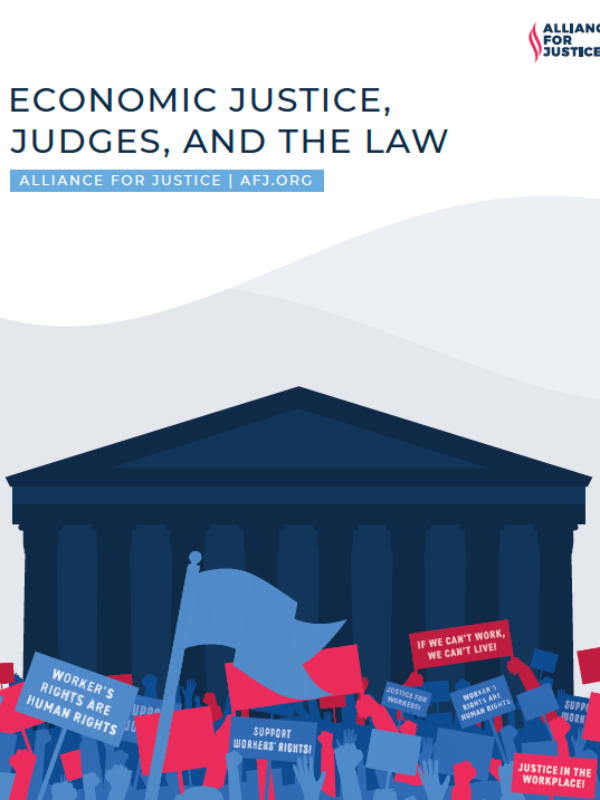 Every day, federal judges decide issues of enormous importance to peoples’ economic lives. Judges decide whether consumers and workers harmed by corporations and employers can bring lawsuits in court, or whether they are limited to unfair systems of forced arbitration. They determine whether workers can join together to form unions to fight for better pay and working conditions. And in a country in which an average of 15 workers die of job injuries each day and 2.7 million workers were reported injured or sickened at work in 2020, judges determine whether to enforce occupational safety and health rules to protect workers from injury, illness, or death on the job.

Judges also decide questions that are less obviously “economic,” but that have huge economic implications. These include whether the government can take action to avoid catastrophic climate change; whether employers can discriminate against employees based on race, sex, or other characteristics; and whether states can prevent pregnant people from accessing legal abortion in their home states, forcing them to either use illegal or legally murky abortion methods, spend enormous
amounts of money and travel long distances for care, or give birth against their will with profound economic implications for themselves and their families.

In recent years, our federal courts have ruled overwhelmingly for the wealthy and powerful and against the interests of working people and communities. This report finds that just seven Supreme Court decisions have caused economic harm to at least 74 million people since 2011, including workers, renters, consumers, and low-income people without health insurance. This includes an estimated 250,000 hospitalizations and 6,500 deaths in just 6 months from COVID-19.

One factor contributing to this tilt against working and middle-class people and families is the vanishingly small number of federal judges with backgrounds in organized labor or economic justice fields. This report quantifies the number of active federal appeals court judges with backgrounds in these fields, which we define as union-side labor law, employee-side wage and hour law, consumer
protection, and civil legal aid. Only 11 out of the 171 court of appeals judges on active status as of July 1, 2022 have any background in one of these economic justice fields. This number is down from 14 since 2021 because of judges taking senior status, a form of semi-retirement. Four more of these 11 have announced they will take senior status, upon the confirmation of their successors, so the number will soon drop further. Only two active appeals court judges spent the majority of their pre-judiciary careers working in those fields, down from four last year.

The dearth of judges with labor and economic justice backgrounds is part of a larger lack of professional and demographic diversity among federal judges, this includes underrepresentation of Latinx judges, those with a disability, and those who have practiced in the areas of climate justice, reproductive rights, and other civil rights categories. Most federal judges spent their careers representing powerful organizations like corporations, or the government as prosecutors. They are overwhelmingly
white, male, and heterosexual. They also come disproportionately from wealthy or economically affluent backgrounds. Judges with corporate or prosecutorial backgrounds are also more likely to be white and male than judges with other kinds of professional experience.

Demographic and professional diversity among judges is important not just because it improves public confidence in the courts and provides role models for other people from under-represented groups, although those are also benefits. But most importantly, diversity is crucial because it improves judicial decisionmaking by bringing often-excluded perspectives to the federal justice system.

Multiple studies confirm the common-sense observation that judges’ personal and professional backgrounds affect their decisions. For instance, judges who are former prosecutors and corporate lawyers are more likely to rule against workers in employment cases than judges with other types of backgrounds.

Much of our current lack of demographic and professional diversity on the courts can be traced to a successful and documented 50-year campaign by the Republican Party and organized corporate interests to define what it means to be qualified for the federal bench and to pack the courts with judges that favor the wealthy and powerful. The goal of this campaign has been to choose judges whose records showed they would use the law to increase the power and profits of corporations at the expense of most people, and in turn, to further the political interests of the politicians those corporations helped elect. These judges have proven themselves willing to ignore or rewrite laws by ruling in favor of
corporations and against workers and consumers. They have also eviscerated voting rights and issued decisions that disempower communities based on race and immigration status.

The three justices President Trump named to the Supreme Court are all good examples of this pattern. They all had records of bending laws passed by Congress to shift power and rights from workers and families to large corporations. As a result, wealthy and powerful corporate interests and the elected officials that cater to them spent millions of dollars and broke long-established rules to
confirm these justices.

While Democratic presidents have nominated somewhat more judges with backgrounds representing underrepresented people and communities, they have also tended to choose more former corporate lawyers and prosecutors than economic justice lawyers, civil rights lawyers, or public defenders. This is partially attributable to the conservative assumption, which has at times been supported by purportedly neutral institutions like the American Bar Association, that lawyers who built their careers by practicing in these areas are less qualified to be federal judges. This is despite the pivotal impact of phenomenal Supreme Court Justices with nontraditional legal backgrounds such as Thurgood Marshall and Ruth
Bader Ginsberg, who both had prominent careers in civil rights and women’s rights, respectively, prior to their appointment to the Supreme Court.

President Biden has broken with this pattern, and his administration’s judicial nominees have been admirably diverse in terms of race, gender, sexual orientation, and professional background. Many of President Biden’s nominees have been public defenders and, to a slightly lesser extent, civil rights lawyers. But he has named only two judges with labor or economic justice backgrounds
to the federal appeals courts, and just one has been confirmed. The need for
more judges with economic justice experience is pressing.