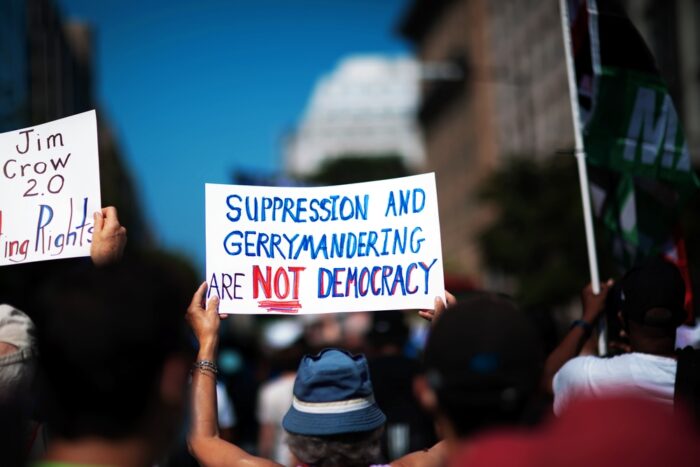 The process of drawing new voting maps, known as “redistricting,” occurs every 10 years following the census and is critical to our democracy. If done right, maps are redrawn to reflect population changes and ensure equitable representation. But too often, redistricting is followed by “gerrymandering,” in which the political parties that control redistricting manipulate electoral boundaries to create unfair advantages and try to cement themselves in power and deny political representation to constituencies such as communities of color.

2022 is the first year that federal elections will take place after the 2020 census determined new representation for congressional and state legislative districts. Republican state lawmakers have unsurprisingly seized the opportunity to gerrymander districts in ways that specifically target communities of color and give them less power. One might hope that the courts would recognize these racial gerrymanders directly violate the Voting Rights Act (VRA), but the Supreme Court recently indicated it’s quite willing to let them get away with it, at least for this year.

In February, the Court issued an order from its “shadow docket” allowing Alabama’s racial gerrymander to remain in effect for the 2022 election. Since then, two other states have succeeded in allowing unlawful gerrymanders to proceed despite court challenges. Then this month, the Supreme Court issued yet another shadow docket ruling blocking a redistricting decision by the Wisconsin Supreme Court because it added a majority-Black district. The Court is sending an invitation to states to enact racist gerrymanders, and federal legislation is clearly needed to intervene when they choose to do so.

At issue in Merrill v. Milligan was whether Alabama had an obligation to draw a second majority-Black congressional district under the VRA. Currently, Black Alabamians make up 27% of the state’s population, but under the new map passed by the Republican-controlled legislature, they control only 14% of the state’s congressional delegation. The map packs a huge number of Black voters into one of seven congressional districts (“packing”). The remaining Black voters are spread out in six majority-white districts, where voters of color stand no chance of electing their preferred candidates (“cracking”). This is a textbook example of a racially gerrymandered map designed to dilute the voting power of a protected minority, in this case Black voters.

Within hours of Alabama adopting this map, Black voters and civil rights groups challenged it in federal court, arguing it would be easy to undo the packing and cracking of Black voters to create two reasonably compact, Black-majority districts. A three-judge district court panel held a seven-day preliminary injunction hearing with live testimony from 17 witnesses, including 11 experts. The parties also submitted an “extremely robust body of evidence”: more than 400 pages of pre-hearing briefing, 600 pages of post-hearing briefing, and 350 hearing exhibits.

In a 225-page opinion, the panel — which included two judges appointed by President Trump — unanimously struck down the map. The court ruled that the plaintiffs were substantially likely to establish that the map violated Section 2 of the VRA by unlawfully slicing up Black communities to boost the voting power of white residents. The court also found that the plaintiffs established the requirements for preliminary injunctive relief and ordered the legislature to redraw the map within two weeks. If the legislature failed to do so, the court said it would appoint an expert cartographer to redraw the map to comply with federal law.

Despite its incredible attention to detail, the district court’s opinion didn’t matter to the Supreme Court’s conservative majority. Knowing it could rely on the anti-voting rights record of the Roberts Court, Alabama filed an emergency appeal directly to the Supreme Court. Without briefing, oral argument, or even an explanation, the Court ruled 5–4 to halt the lower court order, ensuring Alabama’s egregious racial gerrymander will remain in place for the 2022 election.

The Court’s “shadow docket” order is a single paragraph. Five of the conservatives voted to reinstate Alabama’s racist maps, but only Justice Kavanaugh, joined by Justice Alito, bothered to explain his reasoning in a concurrence. Kavanaugh argued that the 2022 election — which, at the time, was still nine months away — was too soon for courts to get involved. This, of course, is disingenuous. The Alabama map became law on November 4, 2021, and the plaintiffs filed their lawsuit within hours; the case against the map could literally not have begun any earlier. Alabama’s primary election is set to take place on May 24, 2022, while the general election is November 8, 2022, approximately one year after the lawsuits began. Unless the entirety of 2022 now counts as “close to an election,” four months before a primary election and nine months before a general election is hardly last minute. If this is too close to an election, this suggests that relief for racial gerrymandering would be simply impossible until after at least one election cycle for decades to come.

It’s also important to note that the Alabama legislature had access to at least 11 illustrative maps submitted by expert witnesses, showing that it is possible, consistent with the state’s redistricting criteria, to draw two majority-Black congressional districts. It would have been easy for the legislature to implement one of these remedial redistricting plans quickly, well before the primary and general elections. Plus, Alabama was on notice since at least November 2021, when the lawsuits commenced, that a new map might be required.

The decision by the Court’s conservative wing was so extreme that even Chief Justice John Roberts, who has spent his career both before and after joining the Court dismantling voting rights, thought it was a step too far. Roberts joined Justices Breyer, Kagan, and Sotomayor in dissent, commending the lower court for having “properly applied existing law in an extensive opinion with no apparent errors for our correction.” But we shouldn’t be fooled by this. Roberts indicated he would go back to his career mission of dismantling voting rights protections once the case is decided on the merits, which will happen sometime next term. At best, there are four very tenuous votes to protect the VRA.

The Supreme Court’s decision in Alabama does more than just make it harder for Black Alabamans to have a meaningful say in the 2022 midterms. Two other states have also already prevailed in ensuring their racial gerrymanders stick around for at least the rest of this year.

In Arkansas, Trump Judge Lee Rudofsky refused to strike down a racially rigged map that created only 11 majority-Black districts out of 100 total districts, even though Black voters make up more than 16% of the state’s population. Rudofsky acknowledged that Arkansas’ map probably violated the VRA, but he dismissed the lawsuit because he concluded that VRA claims “may be brought only by the Attorney General of the United States.”

This interpretation would mean that individual voters impacted by redistricting could never bring their own lawsuits to vindicate their fundamental right to vote and instead would be completely reliant on the U.S. Attorney General to protect them. In addition to being flat-out wrong, this goes against more than 50 years of precedent. As Ian Millhiser noted, private lawsuits have been a staple of civil rights law since the 1960s, and a majority of the Supreme Court has previously found that Section 2 of the VRA contains a private right of action.

Rudofsky spent his career before taking the bench advancing false and dangerous narratives surrounding voting rights, which is why Alliance for Justice opposed his nomination in 2019. Likely emboldened by the anti-voting rights Supreme Court, Rudofsky seized this opportunity to flout well-established precedent and further weaken the VRA.

In another recent decision in Georgia, U.S. District Judge Steve Jones, an Obama appointee, found that the state’s map likely infringed on the rights of Black Georgians by not including an additional Black-majority district in the Atlanta suburbs. However, Jones felt too constrained by the Supreme Court’s Alabama decision to intervene. He explained that “it would be unwise, irresponsible, and against common sense” to ignore Merrill v. Milligan, concluding that changes at this stage — 12 weeks prior to the primary election — would be too disruptive to the election process. Like in Alabama, the Georgia plaintiffs filed their lawsuit within hours of the map being enacted and could not have acted any sooner. A new procedural strategy was in play in Georgia, as Governor Brian Kemp waited 38 days after the maps were passed to sign them into law, no doubt to stall legal action against the maps for as long as possible.

It’s hard to see the Arkansas and Georgia rulings as anything other than a direct result of the Supreme Court’s shadow docket ruling in Alabama. Now, at least three states’ elections will proceed with racially rigged maps that likely violate the VRA. More states may be encouraged to enact unconstitutional gerrymanders, as Louisiana did just this week, and more judges may feel constrained (or emboldened) to not strike them down. If litigation ends up in federal court, there’s little to suggest the Supreme Court will stop them.

In fact, it appears poised to do the opposite. In its latest hostile move to voting rights, the Supreme Court blocked a redistricting decision by the Wisconsin Supreme Court using a summary reversal. After the Republican legislature and the Democratic governor failed to come to agreement on various redistricting alternatives, the state’s highest court chose the plan that closest fit its directive to make the least possible change to the maps.

Republicans challenged the new Wisconsin maps at the U.S. Supreme Court. In an unprecedented move, the Supreme Court intervened, claiming that the state court did not address “whether a race-neutral alternative that did not add a seventh majority-Black district would deny Black voters equal political opportunity.” In their dissent, Justices Sotomayor and Kagan called the emergency intervention “extraordinary but also unnecessary.” They reasoned that the Supreme Court should have let the process unfold because the Wisconsin court appropriately preserved the possibility for a challenge in the proper forum.

Given these challenges, Congress must act immediately to protect voting rights. Federal legislation can transform how redistricting is completed — stepping in where the courts have stepped out — to restore fairness to the process. It could also enhance the ability of voters to challenge discriminatory maps in court, require meaning­ful transparency in the redistricting process, and mandate the use of nonpartisan, independent commis­sions to draw maps. With our country staring down what could be some of the worst gerrymandering in history, federal reform is urgently needed.