The Role of State Courts in Protecting Our Democracy 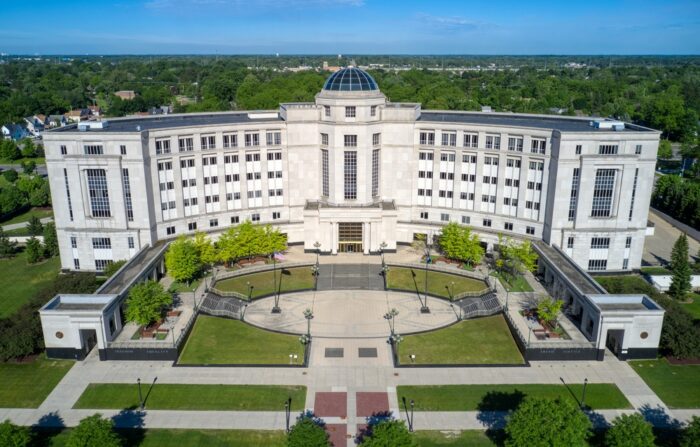 The Michigan Hall of Justice, home to the Michigan Supreme Court. CREDIT: Shutterstock/RyanJL01

Any day now, the U.S. Supreme Court will hand down a decision that’s expected to overturn the landmark 1973 decision Roe v. Wade, which established the constitutional right to abortion. This will cap one of the Supreme Court’s most impactful terms in recent memory. It also serves as a reminder of how state courts are growing in importance to protect our rights as the U.S. Supreme Court becomes increasingly hostile to them.

State courts have an outsized impact on the lives of Americans, protecting rights and advancing justice under state constitutions that can be more forward-thinking than the U.S. Constitution. In fact, state courts are where 95% of all cases in the county are filed; they hear more than 70 million cases every year. This means that state supreme courts frequently have the last word on many critical issues — access to high-quality education, protections for consumers and workers, access to reproductive health care, and the quality of the air we breathe and water we drink.

One of the essential functions of state courts is guarding against efforts to undermine democracy. In 2020, many state supreme courts played exactly that role, issuing important rulings to protect election administration and ensure access to a free and fair election. For example, the Pennsylvania Supreme Court ruled that ballots mailed before or on Election Day but received up to three days after Election Day must be counted, protecting Pennsylvanian voters’ ability to safely cast their ballots during the pandemic. After the November 2020 election, the Michigan and Wisconsin high courts rejected efforts to delay certification of each state’s presidential election results, ensuring the integrity of our elections.

These decisions, and many others, held the line for democracy in 2020. They have also made state courts ripe for partisan retaliation and manipulation. In 2021, state legislators increasingly targeted state courts in an effort to weaken their independence and distort the outcomes of future elections. An analysis by the Brennan Center found that lawmakers in 35 states considered at least 153 bills targeting state courts, 19 of which have become law in 14 states. In Georgia, for instance, a new law will make it more difficult for state court judges to extend polling place hours to accommodate voters because of long lines or other logistical issues. 2021 also saw a wave of restrictive voting legislation and partisan election review efforts throughout the country.

2022 will be a huge year for our democracy and state courts. In total, 33 states are holding elections for state supreme courts, including several key battleground states like Ohio, Michigan, Pennsylvania, Nevada, and North Carolina. Other states, such as Arizona and Kansas, have important retention elections for their high courts. Additionally, over the coming year, many state supreme courts will play a major role as states redraw their maps for state legislative and congressional offices. We are already seeing many legal challenges to new redistricting maps. In 2022, the Ohio Supreme Court and North Carolina Supreme Court struck down redistricting maps that heavily favored Republicans; meanwhile, the Kansas Supreme Court and Tennessee Supreme Court allowed gerrymandered maps to remain in place for this year’s elections. These decisions underscore the important role state supreme courts play in protecting — or not protecting — our democracy.

With increasing attacks on our democracy, including state courts, already underway this year, AFJ has launched a new resource: the State Court Justice Project. Our tool outlines the judicial selection methods for state supreme courts across the country so voters can better understand how judges in their states are chosen. Additionally, our tool highlights states with important upcoming elections in 2022, as well as states set to consider issues of national importance, like redistricting and voting rights.

Unlike the federal system — in which judges are nominated by the President, confirmed by the Senate, and serve for life — judicial selection at the state level varies widely and can be quite confusing. While some state court judges are appointed, most are elected. Elected judges might appear to voters in three ways: (1) partisan elections, where candidates declare a party affiliation; (2) nonpartisan elections; or (3) up-or-down retention elections, in which only the incumbent is on the ballot and voters decide whether to grant another term. In non-electoral states, the decisionmakers — commissions, governors, and/or state legislatures — have significant power to reshape state courts. For example, in New Jersey the governor appoints judges who are then confirmed by the state Senate. It’s important that voters understand these nuances when they go to cast their ballots this November.

State courts and the justices who serve on them matter. While disappointing, it is also sadly unsurprising that the justices who serve on our state supreme courts are overwhelmingly white and male, with experience advocating for the rich and powerful. This year and every year we should prioritize filling our state supreme courts with highly qualified judges who reflect the breadth of the communities they serve. We must elect state supreme court judges who resemble America demographically and who understand the experiences of all people.

As November approaches, we hope that you will use our new state courts tool to see how judges in your state are selected and how you ensure that the right people are chosen for these important positions. Check out the State Court Justice Project now.