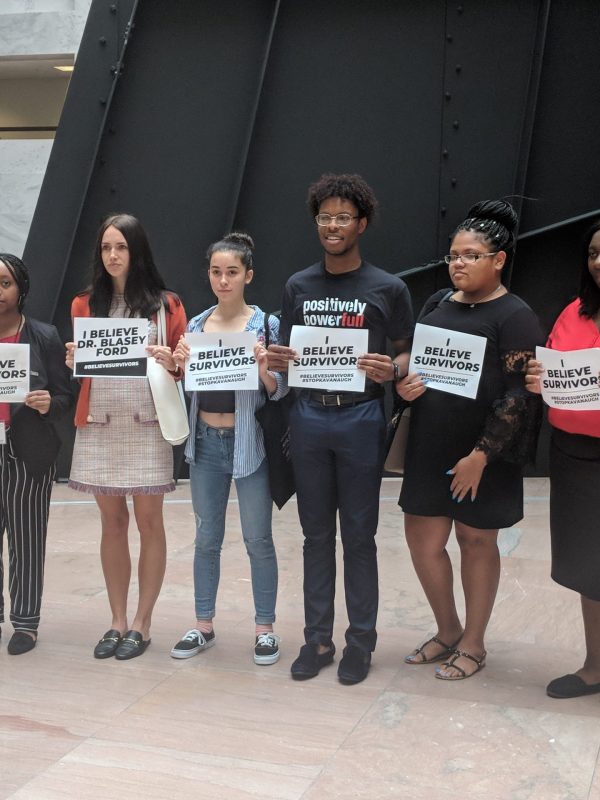 Ryan Bounds (Nominated to Ninth Circuit; Withdrawn) wrote an article arguing that schools should impose a higher standard of proof for sexual assault claims, in contrast to the requirements for claims of other serious, nonsexual campus misconduct. The stringent “beyond a reasonable doubt” standard promoted by Bounds is typically reserved for criminal cases, whereas most schools use the “preponderance of the evidence” standard in their internal investigation of misconduct complaints. The imposition of a higher standard of proof on survivors of sexual violence, and not victims of all other types of misconduct, discriminates against sexual assault survivors.

Daniel Collins (Ninth Circuit) argued in defense of Internet Brands, Inc. against negligence claims after a woman utilizing Internet Brands’ model networking website was lured into a fake audition and sexually assaulted. The corporation allegedly knew about the rapists’ use of the website but did not warn users.

Kurt Engelhardt (Fifth Circuit), as a district court judge, had a troubling record with regard to sexual harassment claims, often going out of his way to rule that allegations do not rise to the level of objectively hostile conduct and to keep cases from even being heard by a jury.

Thomas Farr (Nominated to Eastern District of North Carolina; Withdrawn) supported a North Carolina bill that prevented women who were discriminated against or who were victims of sexual harassment in the workplace from filing a lawsuit in state court, calling it a “better policy for the state.” As an attorney, Farr defended a company when a supervisor said that female employees were “stupid, retarded, and awful,” that “women with children should be at home and not employed in the workplace,” and that he would go to an employee’s hotel room to “help [her] pick [her] panties off the floor.” Farr defended another company where a woman was denied a position because the job “was too hard and too rough for a woman.”

Kenneth Lee (Ninth Circuit) wrote a number of articles that demonstrated hostility toward women’s rights and equality.  He inappropriately criticized the experiences of sexual harassment survivors, espoused harmful stereotypes of sexual violence, and showed skepticism regarding the reported prevalence of rape on college campuses.

Steven Menashi (Second Circuit) criticized “Take Back the Night” marches, which seek to end violence against women, writing “’Take Back the Night’ marches charge the majority of male students with complicity in rape and sexual violence (every man’s a potential rapist, they say, it’s part of the patriarchal culture).” As Acting General Counsel of the Department of Education he was intimately involved in the 2017 Title IX Question and Answer guidance document that rescinded Title IX guidance on schools’ responsibilities for protecting students from sexual harassment and violence; and he worked on the Department’s proposed rule on campus sexual assault.

Sarah Pitlyk (Eastern District of Missouri) dismissed the credible accusation of sexual assault against Brett Kavanaugh as “direct character assassination” and a “last-ditch effort to block his path to the Supreme Court.”

Neomi Rao (D.C. Circuit) warned of “hysteria over date rape.” She argued, “a good way to avoid a potential date rape is to stay reasonably sober” and “if she drinks to the point where she can no longer choose, well, getting to that point was part of her choice.” OIRA, under Rao’s leadership, signed off on Education Secretary Betsy DeVos’s efforts to roll back protections for survivors of sexual assault on college campuses. The proposed rule, while not yet final, would make a series of changes to Title IX processes on college campuses that many survivor groups oppose. As organizations such as End Rape on Campus and Know Your IX explain, “[I]f the proposed rule becomes law, survivors will lose access to their education and schools will continue to sweep sexual violence under the rug. The new rule will stop survivors from coming forward and make schools more dangerous for all students.” Rao also criticized the Violence Against Women Act (VAWA), a landmark law with bipartisan support that protects survivors of sexual and domestic violence and seeks to root out sexual violence. In discussing Supreme Court precedent, Rao stated: “So they’re able to invalidate things like the Guns Free School Zone Act or parts of the Violence Against Women Act, which are really kind of grandstanding statutes, which are largely covered by other state laws or something like that.”

Lee Rudofsky (Eastern District of Arkansas) argued that the Constitution prevents Arkansas from being sued for money damages under Title IX. If that were true, students would no longer be able to sue their school for money damages when the school mishandles their sexual assault claims.

David Stras (Eighth Circuit) as a state court judge dissented in a case that held that trial judges had the ability in a rape case to allow expert testimony that contradicted the defendant’s claim of consensual sex.

Justin Walker (DC Circuit; previously Western District of Kentucky) continued to defend then-judge Brett Kavanaugh even after multiple women credibly accused him of sexual assault. After Dr. Christine Blasey Ford’s testimony, Walker suggested that she was “mistaken” about her own experience of sexual assault.

Don Willett (Fifth Circuit), while on the Texas Supreme Court, limited the amount of compensation that a victim of workplace sexual harassment and assault can collect from her employer.